Five things England must change for the MCG

Build pressure with the ball by bowling as a unit

The Australian seamers made sure that the pressure was never off the England batsmen. Although Mitchell Johnson and Ryan Harris took all but two of the wickets between them, Ben Hilfenhaus conceded barely two runs per over from 31 overs, bowling dry as they call it. After an initial poor spell Jimmy Anderson improved and Chris Tremlett was excellent throughout. But Steve Finn conceded almost a run a ball. England’s whole bowling strategy for this series has been based on incisive use of the new ball and disciplined attritional bowling thereafter. For Melbourne they will need to get back to that approach.

Australia needed only 50 minutes on the fourth day to take England’s last five wickets and wrap up a 267-run win in the third Ashes Test at the Waca.

The emphatic victory levels the five-match series at 1-1, with the contest moving to Melbourne on Boxing Day.

Ryan Harris finished with a Test-best 6-47 as England were all out for 123.

The tourists resumed at 81-5, seeking an unlikely 391 to win in Perth, but Harris took four of the last five wickets and England folded meekly. 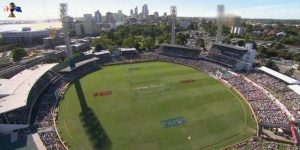 England face a monumental task to avoid defeat in the third Ashes Test in Perth after slumping to 81-5 in pursuit of an improbable victory target of 391.

A Mike Hussey century and 95 from Shane Watson lifted Australia to 309 all out in their second innings on day three.

Mitchell Johnson and Ryan Harris both struck twice as England lost their top five batsmen cheaply, leaving Australia on the brink of squaring the series.

Johnson answers call in his country’s hour of need

It was the day the series came back to life. It was the day Test cricket regained its reputation as a relentless, ruthless struggle between hostile flingers and brave batsmen. It was the day a large crowd was transfixed. It was the day Australia rejected the meek in favour of the mongrel. Most of all it was the day a tall, fragile and hitherto wayward speedster convinced England he was no mere myth.

Like all the best storms Mitchell Johnson’s burst came without warning. Certainly a few promising signs had been observed. On the previous day the genial banana-bender-cum-Western Warrior had scored 62 with numerous fluent strokes and plenty of defiant clouts. As a rule, Johnson’s batting moves in harmony with his flinging. Clearly he was feeling good about his bowling and so himself.

Previous generations had the art of making ugly hundreds at tough times.

Now Australia is just plain ugly as yet another Ashes series slips away.

Another collapse, this time in front of a first-day crowd of 21,473 at Perth’s WACA Ground, has left Australia well behind in the third Test. Late in the last session, Australia was bowled out for 268 and England faced 12 overs to finish the day at 29 for no loss.

Another strong performance from home-town hero Mike Hussey (61), who now has 401 runs in the series at better than a hundred, and combative Brad Haddin (53) offered the only early substance.

Mitchell Johnson chimed in with an impressive cameo (62) and became involved in a war of words with Jimmy Anderson. The fast bowler turned to his opposing paceman in exaggerated celebration after bowling Ryan Harris (3).